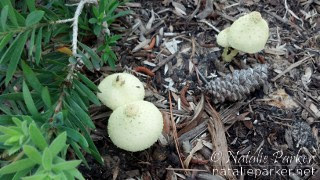 While out working on leash training our chiweenie pup this morning, these brilliant mushrooms standing out against the gloom of an overcast morning caught my eye. I just had to stop and take a picture, much to the dog's annoyance.

As I continued on, I noticed more and more mushrooms growing in the fresh mounds of mulch surrounding the trees along the sidewalks. Stopping to take more pictures, ignoring the puppy's protests, my thoughts drifted to Nanny's kitchen. 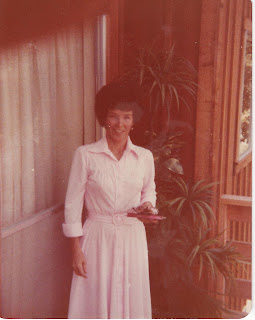 Nanny was Effie Lorraine Parmer Martin, my maternal grandmother. I don't know why she chose "Nanny", but "Grandma" was already taken by her own mother.

Nanny's kitchen was decorated with hand painted wooden plaques which she made herself. They consisted of mushrooms and various garden critters displayed in a line over the kitchen sink and cabinets. She even had a set of mushroom-themed cookware, the kind you could probably only find at garage sales or ebay these days.

Her kitchen wasn't large, but she had a closet-size pantry where, in addition to food, she kept the dominoes, playing cards and poker chips. My parents and grandparents would sit at the kitchen table playing 42 in the afternoon, while my sister and I entertained ourselves in the living room or outside. In the evening they would move to the dining room table on the other side of the kitchen to play poker.

She loved to cook, and try out new recipes she found. Every time we came over, Nanny had some freshly baked treat for us. She made us our first Rice Krispie treats and peanut butter corn flake bars.

So, today, I am thankful for the mushrooms that remind me of Nanny's kitchen, and all the good times we had over there. 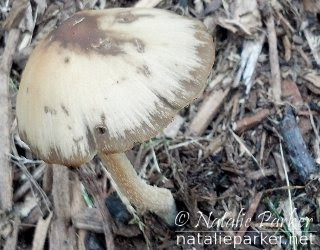 Posted by Natalie Parker at 10:09 AM No comments:

Motivation Monday: The science of productivity

I consider weekends family time, because Saturday and Sunday are usually the only days my husband and daughter can be home all day (barring sickness or major holidays). And on weekends, I sometimes find myself browsing YouTube on the PS3 while relaxing with the family. One of my favorite youtube channels is AsapScience.

This last Saturday morning, while browsing through the AsapScience channel, I came across The Science of Productivity. Immediately my mind went to the blog post I had started a couple of hours ago, then abandoned to watch YouTube.

What I got out of watching, and re-watching, this illuminating video was that I need to set goals. I mean, "Get as much done as I can before I die," doesn't really set any targets. I need to break it up into small projects, plan about how long it should take to complete, and dedicate a specific time of day to work on it (instead of work on it until I'm exhausted and no longer want to mess with it).

Family history isn't a job for me, it's a hobby (one of many!). I have no boss, no deadlines, no one to grade me on the quality and accuracy of my work. No one is holding me accountable but me, and admittedly, I tend to cut myself a lot of slack.

So today, I am going to choose a specific point in time for one ancestor, I'm going to give myself one week to research, outline and write. I will only work on it for 90 minutes at a time, take a short break, then get back to work. And when the spawn gets home from school, I will stop for the day. Let's see how that goes...
Posted by Natalie Parker at 9:53 AM No comments: 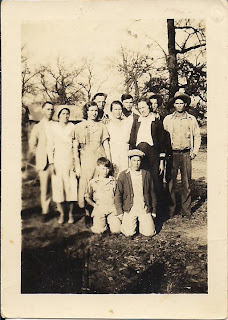 If anyone needs these photos for their research, or to hang on their "ancestor wall", be sure to click on them first for the full size image.
Posted by Natalie Parker at 9:48 AM No comments: