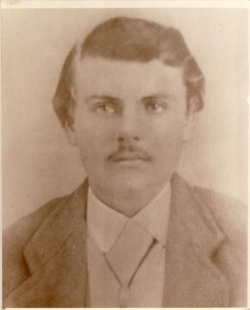 We were told we were descended from vikings (among other European roots). I'm sure this postulation came more from historical associations with the word Norman than any oral family traditions that may have been passed down.
Merriam-Webster has this to say:

We come from the land of the ice and snow...?


Despite the rather extraordinary claims, I haven't been able to confirm a Norman ancestor outside of Texas. My Norman line makes its first reliable appearance in Gonzales County, when my ggg-grandfather Benjamin F. Norman married widow Mary E. Stevens Townsend on November 10, 1854.

According to the 1860 and 1870 censuses, Benjamin F. Norman was born in Alabama around 1835, he was literate, and neither of his parents were of foreign birth. Exhaustive research into Benjamin Normans that somewhat fit this description has led me to suspect that he may have been the son of Charles Norman of Benton County, Alabama.

Of course, this is still speculative, as the only evidence I have to support the notion is that I have been unable to trace Charles' B. F. Norman beyond the 1850 census. So, currently, my Norman line is still much more Texan than viking.


Benjamin Norman died before 1879, when his widow married Isaac S. Steen. The Gonzales County history center also had muster rolls for a Benjamin F. Norman in the Texas 22nd Cavalry, Company G. However, his age on the muster rolls have him several years younger than he should have been during the Civil War. Inconsistent ages have actually been a bane with several of my Gonzales County ancestors, but that is an issue for another time.

As always, feel free to contact me if you have any interest in this line.
Posted by Unknown at 10:21 AM

Email ThisBlogThis!Share to TwitterShare to FacebookShare to Pinterest
Labels: my ancestors, My Genealogy, Norman, Surname Saturday