FHWC: Grandma was a witch

Zula Irene Nowell was born 11 Nov 1903 in Comanche County, Texas. She was a granddaughter of Joseph Benton Nowell, the former subject of my FHWC project. But I've decided instead to write about my memories of Grandma. And blog them. Much easier.

She claimed her daddy was 100% Irish, by which I think she meant that he was descended from Irish immigrants, because surely she knew he was born in Northeast Texas. Her mother, she said, was Black Dutch.

Grandma (she was my great-grandmother, but we all called her Grandma) and her siblings grew up picking cotton on her parents' farm. She received an 8th grade education in Lawn, Taylor County, Texas before her family moved to Henderson County. There she met her future husband, Rufus Amery "Jack" Parmer, the son of another cotton farmer.

Grandma's divination teachings
According to her, as a young woman, with a tub of water and a mirror at noon on the first day of May she discovered who she would marry (this would have been sometime between 1922 and 1924). She said she saw Jack Parmer's face in the water wearing a hat. Then the next time she saw him in person, he was walking up the road, wearing that same hat.

They were married 16 Sep 1924 in Tyler. I think the photo above was taken that day, because she had several printed up (I'm not sure how many are out there). Here is the back side of the photo: 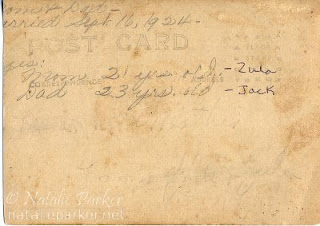 Near the bottom Grandma Zula wrote "To Dear Mother From Jack and Zula." She wrote it in pencil so it is rather difficult to make out now. It was probably one of her daughters that wrote in the dates and ages in pen later.

Anyway, back to Grandma's witchery, she had a method for determining the gender of your future children. Stick a threaded needle into the eraser end of a pencil, and hold the pencil over your wrist by the thread (now I know this is called a pendulum).

Eventually the the pencil will begin to move. If it moves in a circle, it means girl. Back and forth in a line means boy. Then it will come to a stop, and begin to move again telling you the sex of the second child, and so forth for as many children as you think you want to have.

As kids, we had a good time playing with this one. I can't really speak to the effectiveness of it, since it has a fifty-fifty chance of accuracy, and I only have one child. But my sister swears by it. I always got 3 girls, then a boy.

One who controls the weather, controls the world
In addition to divining future elements of one's life, Grandma also passed on a means of controlling the weather. Texas summers are often drought-ridden, so whenever we really needed some rain, Grandma would call us up and tell my sister to "throw a snake over the fence."

So my sister would catch and kill what my great-grandmother called a chicken snake, though I think they are more commonly referred to as rat snakes. Then my sister would hang it over the barbed-wire fence and we would wait.

Now, I'm not a superstitious person, and I'm not exactly sure how hanging a dead snake over a fence would have any impact on the weather, but I'll be damned if it didn't always seem to work. In fact, the more snakes my sister hung on the fence, the more rain we would get.

Grandma's snake bite remedy
Grandma also had a way to deal with poisonous snake bites, though we never really had a need to test this one. The way she put it was, "Split a chicken and lay it over the bite." It would seem the intention behind doing this was to draw the poison out of the wound, into the chicken.

And this is why my mom would declare, "Grandma is a witch!"
Posted by Unknown at 8:53 AM