In the Spring of 1927, Grandma, Granddaddy and 1 1/2 year old Effie were living in or near Chandler, Tx (maybe Brownsboro), when they welcomed Winnie Dois Parmer into the world on March 22. 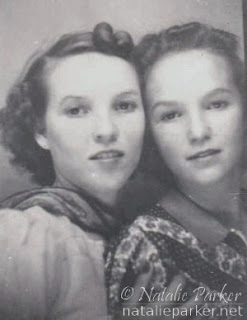 The sisters were very close growing up, seemingly inseparable when you look through the family photos. While the two were very different, their personalities complimented each other well. Effie was shy and reserved, whereas Winnie was very outgoing. And it was probably because of this that Grandma allowed Effie to wait on starting school until Winnie could go with her.

Now, Granddaddy enjoyed a stop at the bar when he had the chance, but he learned, perhaps the hard way, that he couldn't stop there if he had Effie with him. You see, Grandma was opposed to drinking, so Granddaddy just wouldn't tell her. But Effie would rat him out.

Winnie, on the other hand, enjoyed going to the bar with her daddy. Granddaddy would set her up on the bar, and she would become the center of attention. Granddaddy didn't have to worry about Winnie telling on him.

Zula's brother John Benjamin, and his wife Alice Terrell, added two more children to their growing family. In addition to Lorene, Murry, and Juanita, John and Alice had John B. Nowell Jr. on January 1, 1926, and Margaret Virginia Nowell on 26 July, 1928.

On March 15th, 1926, Zula's grandmother, Martha Elizabeth Dennis Nowell, succumbed to influenza at the age of 82. She died in the home of her son-in-law and daughter, J. Sam and Bettie F. Davis, in Chandler, and was buried at Rockhill Cemetery in Brownsboro.

Around this same time, something happened that none of us knew about until Grandma was in her 90s (heck, I just found out last week!). As Gina told it:

"Me, Grandma and Mama were sitting around her kitchen table as usual and somehow it came up. Grandma said it took place between Effie's birth and Winnie's. She thinks she was just a month or so pregnant...it wasnt officially verified by a doctor or anything. She said she was "late" and figured she must be pregnant again but within a few weeks "stuff" came out and she figured she miscarried."

Almost a year after Winnie was born, Granddaddy's mother, Martha Fransina "Synie" Parmer died of heart failure in Chandler. About a year and a half later, Granddaddy's father, Green Clifton Parmer, also died, on August 1, 1929. Like most of the Parmers and Nowell's who died in Henderson County, they are also buried in Brownsboro's Rock Hill Cemetery.

Maggie Lorraine and her husband, Otis Sanders, as you may recall, divorced around this time, or at least sometime between their daughter Elsie's birth and Otis's 1930 marriage to Allene Hancock.

On October 24, 1929, the stock market crashed (Black Tuesday), sparking the beginning of the Great Depression. In November, around $30 billion in stock values simply vanished, while President Hoover announced that, "Any lack of confidence in the economic future or the basic strength of business in the United States is foolish."

By March of 1930, the unemployment rate more than doubled from what it was prior to "Black Tuesday", to over 3 million.

Meanwhile, in 1930, Grandma and Granddaddy were raising their daughters on a rented farm in part of Justice Precinct 4 in Henderson County. Grandma's siblings, George "Kit", Dora and Tommie were still at home with their parents and young niece, Oletha Wilson.

Timeline of The Great Depression - PBS - http://www.pbs.org/wgbh/americanexperience/features/timeline/rails-timeline/
Posted by Unknown at 10:59 AM