Cotton farmers had struggled with drought conditions in Taylor county throughout the 1910s, but the 1920s brought a resurgence in cotton farming to the area. This is where we find the Grandma's family in 1922, about 25 miles south of Abilene in the tiny rural community of Lawn.

The Santa Fe Railroad laid tracks in 1909, but the small town of Lawn wasn't close enough to benefit. The community couldn't bring the rails to Lawn, so in 1910 they took Lawn to the rails, leaving behind what is now called Old Lawn.

The newly re-established town of Lawn enjoyed a fair amount of growth over the next two decades, with a peak population of 650 residents in 1929.

Zula, Maggie Lorraine and Dora were attending school in Lawn, Tx during the 1921-1922 school year. Grandma was 18 years old, and in the sixth grade. 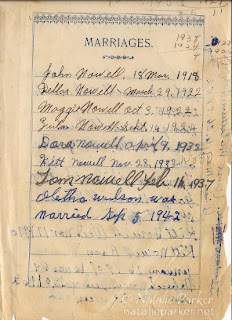 Della Nowell, the eldest of George and Rebecca's children, was 26 in the Spring of 1922. She married a fellow called Bird Wilson on March 22nd, 1922. By the time the cotton was planted, Della was pregnant.

Maggie Lorraine also married in October the same year, but we will get to that story tomorrow.

On February 9, 1923, Della gave birth to Oletha Wilson. But Della soon fell ill. She was suffering from an infection commonly referred to as childbed fever.

Childbed fever, or puerperal fever, according to the Encyclopedia Britanicca, could develop "... after long and injurious labour and unskilled instrumental delivery..." 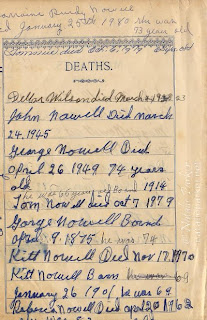 Della Wilson's death certificate states that she succumbed to "Flu and Child Bed Fever" on March 4, 1923 at the age of 27. She was buried March 6th at Rogers Cemetery, in Tuscola about 8 miles northeast of Lawn.

Whatever became of Della's husband is still a mystery to me. Rebecca and George took Oletha in. Grandma had just turned 19 the previous November. After losing her baby brother nearly six years earlier, she had a new baby in her life. But now her oldest sister was gone.

And there would be more joy and heartbreak for the Nowell family in the year to come.